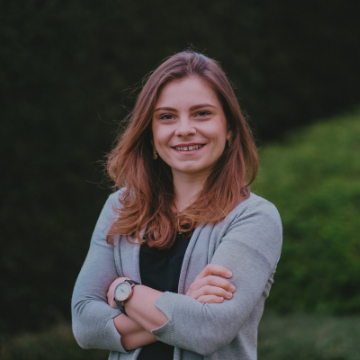 Daniela has four years of experience as a social entrepreneur in education in India. Natively from Romania, Daniela has spent four years working in business development, business growth, marketing, and operations in four states of India, across four fields with different social enterprises before she started her own for-profit education technology company, vChalk, in 2014 in Bangalore.

Prior to 2011, Daniela studied Communication and Public Relations in Romania and Germany and availed the ERASMUS scholarship. She worked in political marketing for two years before moving to the non-profit sector with Habitat for Humanity in Cluj, Romania.

In 2011, Daniela came to India with AIESEC and since then she has worked in waste management, healthcare, and rural craftsmanship in Telangana, Assam, Rajasthan, and Karnataka states. With her work in eye-care in Assam, Daniela won recognition in India and ensured that ERC Eye Care received its first impact investment of $100,000. Since then, the company has grown to serve more than 100,000 patients with access to affordable eye glasses and ophthalmological services in their villages in this North Eastern state of India. In 2013, she received a full scholarship as a Frontier Market Scout, a programme supported by Village Capital to back future social entrepreneurs.

In 2014, Daniela conceptualised vChalk to enable parents and teachers to close children’s early learning gaps using technology. Since then, vChalk has won the D-Prize Award in San Francisco, and the NASSCOM Social Innovation Forum Tech for Good Award in India, has been a global finalist in the Global Social Venture Competition by Berkeley Haas in Bangkok and in the Global Ed-tech Startup Awards in Tel Aviv and London. Under Daniela’s guidance, the team at vChalk has impacted 2,500 students from low-income families and had paying repeat customers in under two years of operation.