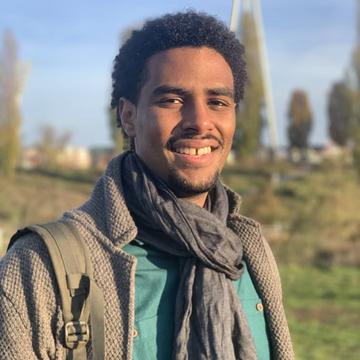 Ashraf strives to unlock hidden potential where it is often missed. He is passionate about creating social change through design and technology and believes in the power of synergy.

During his undergraduate degree in electrical engineering, Ashraf worked on human-machine interface systems and researched alternative ways of interaction. He then spent time working in a prosthetics lab in Tokyo and was challenged to create products that would suit the Sudanese landscape.

Building off his experience, Ashraf founded Nayla in 2018. A startup working on maximizing eco-social opportunities for amputees in Sudan by creating affordable and high utility prosthetics. Ashraf slowly realised that in order to drive the impact he aspired to have, he needed to look at Nayla's mission not as an engineering problem, but as a developmental one. He and his team then leveraged intensive research, putting the people at the centre of it, looking at the social, economic, psychological, and political factors that come into play. Ashraf also fundamentally believes in including multiple stakeholders from government, NGOs, and the private sector, to achieve common objectives. The end result; Nayla is now on its way to becoming the national supplier for prosthetic services in Sudan with the aim to scale into East Africa.

Ashraf also works as a business development advisor in his father's business, Green Desert Charcoal. A company that transforms agricultural waste into household charcoal and other by-products in Dubai. He assisted in founding the company, examined market opportunities and advised on the best penetration approach and optimal brand positioning, and guided on equity investment agreements to amp up production.

Ashraf also played basketball professionally in the Sudanese Basketball League and in his free time, he coaches business model development and pitching in collaboration with Impact Hub Khartoum.