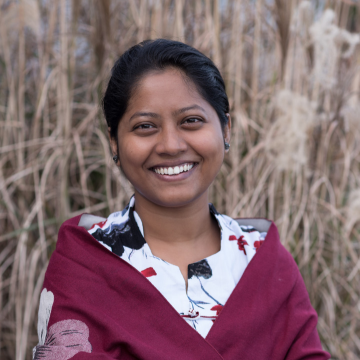 Anjali Sarker is a social innovation expert and development practitioner with seven years’ experience in leading projects that serve the underprivileged population in Bangladesh, with a special focus on women’s economic empowerment through financial inclusion.

Her journey in the development sector started at the age of 20 when she co-founded a social enterprise to provide affordable and eco-friendly sanitation solution in the rural areas. After running her enterprise for two years, she joined Ashoka to launch its operations in Bangladesh. Later she joined BRAC, one of the largest NGOs in the world, in its social innovation lab. At the lab, she had designed, developed and implemented multiple cross-country projects in South Asia and East Africa. In her most recent role at BRAC, she led the Innovation Fund for Mobile Money, a project in partnership with the Bill and Melinda Gates Foundation, to bring digital financial services to one million rural women in Bangladesh.

Anjali is a Senior Atlantic Fellow at the London School of Economics, a Global Shaper at the World Economic Forum, and a New Voices Fellow at the Aspen Institute. She was invited to TEDx events in Hong Kong and in the Netherlands to speak about social innovation and entrepreneurship. Young Professionals in Foreign Policy and Diplomatic Courier magazine recognised her as one of the Top 99 leaders under the age of 33.