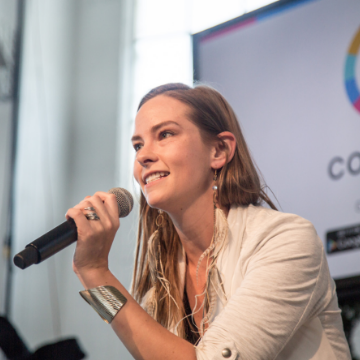 Anima is an entrepreneur with a background in social science and human-centred design. Her work has been recognised in the fields of national politics, social entrepreneurship, and most recently, consumer mobile technology.

Originally from Washington DC, Anima completed her MBA at Oxford in 2011 as a Skoll Scholar.

She earned the award for her first social enterprise, Swing Semester, which operated a civic “semester abroad” program in swing states during the 2004 and 2008 presidential elections. During the program, students knocked on more than half a million doors for progressive campaigns while studying a syllabus on the psychology of political ideologies (i.e. why people vote the way they do), a topic which continues to make for lively dinner conversation.

While at Oxford, Anima teamed up with fellow Skoll Scholars Sean Holt and Xavier Helgesen to produce the first TEDxOxbridge (“Business as Unusual”) an event which now rotates annually between Saïd and Judge business schools.

Inspired by her professor Marc Ventresca, and tech luminaries Reid Hoffman and Kim Polese whom she met at “Silicon Valley comes to Oxford”, Anima became aware of the leverage of consumer technology, and was compelled to participate in bringing wisdom to this infrastructure which will determine so much of how it feels to be human in our future.

After Oxford, Anima moved to San Francisco and soon founded Connect a mission-based consumer tech company building tools for real-world social relationships (as opposed to social media). Over the next four years, she led the design and development of three social-location products, including a map-based social CRM that won Best Overall at the 2014 LAUNCH Festival (following winners Mint.com and Yammer) and later, an experience-planning platform integrating calendar and service APIs to make social planning seamless and depth with friends easy.

Continuing the theme of tech facilitating real-world connection, Anima now leads Social Impact experiences at Airbnb. The largest category on Airbnb’s new experiences platform, Social Impact experiences are inspiring activities hosted by nonprofits around the world that connect travellers (and locals) to their cause. Airbnb waives its fees, so 100% goes to the nonprofit. In this role, Anima is motivated every day by a fusion of three great loves: product, entrepreneurship, and designing experiences that change people. She feels lucky to direct these skills toward amplifying meaningful causes around the world.