A knead for empowerment

A knead for empowerment

Saïd Business School MBA candidate Julie Greene is a social entrepreneur, Skoll Scholar, and a co-founder of The Women’s Bakery, a social enterprise that empowers women in Africa to earn money, learn business skills and improve nutrition in their communities by baking and selling quality bread. The enterprise, which has partnered with local organisations and women across East Africa, has delivered over 600 hours of training in Rwanda alone, and in some bakeries the income of the women they have worked with has increased by more than 400%.

Julie first travelled to East Africa for her undergraduate degree. Inspired by her travels, and troubled by the economic and social inequality she had witnessed both at home and abroad, she joined the Peace Corps, a US government organisation that enables ‘motivated changemakers’ to work with people in some of the world’s most developing communities.

It was while undergoing training for her deployment in Rwanda that she met her co-founder, Markey Culver. ‘We both began working on community projects specific to women, especially regarding creating greater economic inclusion,’ said Julie. ‘We began to ask ourselves: what do women really need in order to upskill and take care of their families?’

It turned out the solution was at their fingertips. ‘We were both living in rural communities in Rwanda. Neither of us were trained bakers, but if we wanted bread, making it ourselves was necessary. Our neighbours were interested in what we were doing, and so we started teaching people in the local community.’ 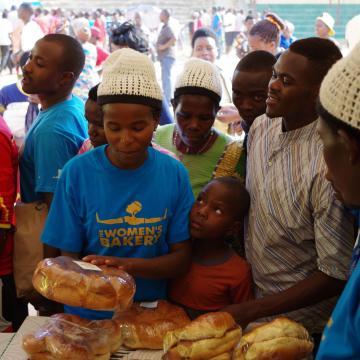 Culver then setup a women’s cooperative to bake bread, with the idea that the women could use it to supplement their families’ diet. However, the trainees showed an interest in selling their bread. Similarly, Greene began selling bread with neighbours in their local marketplace, and the two partners realised the concept had far greater potential.

After a short hiatus during which Julie worked as a youth mentor in Colorado, she returned to East Africa with the goal of turning the co-op bakery into a scalable social enterprise. The project gained traction, and under the name of The Women’s Bakery, quickly grew to encompass seven locations across East Africa.

Julie, whose role as a co-founder included the day to day leadership, management and operations of the Bakery’s headquarters in Kigali, came to Oxford Saïd to improve her business acumen. ‘I don't come from a business background, and while we were thinking about how to scale, I realised I needed to broaden my skillset. When I came to visit the School, I really got a sense of its values: collaborative, with a cohort that genuinely believe business should have a purpose beyond simply making profit. Almost every lesson I have been taught so far, I have thought of some way in which it could apply to the Bakery,’ she said.

Once she has finished her MBA, Julie will remain as an advisor and board member to the Bakery, while furthering her career in the social impact sector. While she will no longer be working on site in Rwanda, some memories will stay with her forever. ‘We track all kinds of social impact indicators, such as personal income, household income and so on,’ said Julie. ‘But for me, the most exciting indicators are more qualitative. I recall one woman who was completely against being on the sales team because she felt she was too shy. But over time, her confidence just kept growing. Until one day, while we were discussing sales targets, she said: “You know what? I’m going to sell four times as much as that target,” and she went out and did it. It’s those kinds of transformations that make all the work worthwhile.’

Read about the Skoll Scholarship.

Photography courtesy of The Women's Bakery.